Mercoledì (Wednesday,) 17/09/2014, Day 7:
Kaye, Audrey, Sadie, Mom, Poppy and I hiked down from the city wall of Orvieto.  We had caffee and waited for the Necropolis (Etruscan tombs) to open.  The tombs were built with the top being a few feet above ground level.  We went into a few of them, they were rooms with enough room for the things they “brought into the afterlife” with them.  After we were done there we hiked back up into Orvieto.  At which point, Nan joined us for lunch. Poppy and Nan went to the Etruscan museum, Kaye and Audrey joined them later.  Mom, Sadie and I went home so I could go to class.  We had dinner here tonight.

Giovedi (Thursday,) 18/09/2014, Day 8:
Busy day!  All of us went to the Market, we had some caffee and juice.  Then we left Nan at the Market and climbed the clock tower.  After the clock tower we went to a lower part of Orvieto and climbed down to the bottom of another well, then we climbed up.  We had lunch, then went home to rest and go to class.  After mine and Audrey’s classes we went down into the Etruscan caves!  It was a tight walk at some point but at others there was a lot of space.  After getting out of the caves we joined Nan who was headed to a marble paper maker’s studio.  We joined her and listened to the man tell us about the history of paper making.  He showed us three antique books from the 1500s-1700s.  After finishing there we went to dinner at a lovely restaurant and headed home. 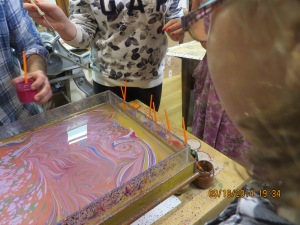 Search Made by Maggie B